One thing I really miss about Windows is using SnagIt because it makes capturing screenshots and adding special effects so easy to do. Unfortunately, there is no version for Mac but developers TechSmith have created Jing which works on both Windows and Mac.

Firstly however, let me state clearly that Jing is no way near as rich in features as SnagIt. In fact, it’s still very much a work in progress and as yet, you can’t even resize images let alone create transparent ones or add drop shadow effects. However, it looks great and it does allow you to take simple screenshots, video casts and share them online immediately which SnagIt doesn’t. 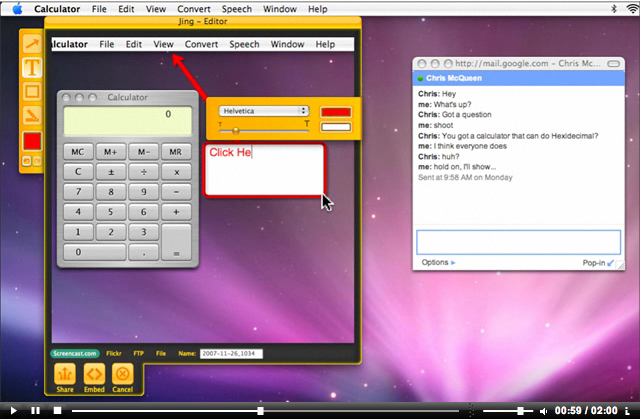 Once you’ve opened Jing, it sits in the top right of your screen like a little quarter sun waiting to spring into action. There are three options immediately available – one is a the screen selection cursor which allows you to drag and select the part of the screen you want or alternatively, it auto detects open windows and allows you to save them instantly. The second option is a window showing you the history of your screen grabs and the last option is the settings tab. To make a screenshot, simply drag the Jing cross hair over the space you want to select and you’ll see it highlighted in colour (the rest of the screen will appear black and white) and release the mouse button. You’re then given four saving options – save to file, upload to FTP, upload to Flickr or upload to screencast.com. You’ve also got a bar on the left which allows you to annotate the screenshot a bit with arrows and text.

PC users have certainly been impressed by it – Jing was rated in the top 100 products of 2008 by PC Magazine (although it did only sneak in at number 100 in a list that saw Lifehacker as low as number 99 so I’m not sure how high praise that really is!). In fairness, Jing shouldn’t really be compared to SnagIt! because it’s designed more for developers that want to create screencasts, tutorials or those that just want to share images quickly rather than spend time editing one particular screenshot. That said, would it really be so hard TechSmith to just add some of SnagIt’s basic features to Jing to make it a truly awesome tool?

If you liked this article then you'll love our newsletter!

Join us to receive hilarious memes, photo galleries, tips&tricks, and the best games!

Convert documents to PDF in SnagIt