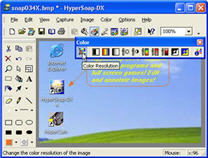 Although many image editors offer screenshot capture facilities, if you’re regularly taking grabs of your desktop, applications or web pages, then it’s probably worth investing in a stand-alone capturing tool. There are dozens of them around, and believe it or not, there are considerable differences between most of these programs.

We’re called upon to nab screenshots on a regular basis, and the two most popular apps in the Softonic offices are SnagIt and HyperSnap-DX, both of which have their own merits. Both programs can be picked up and used very easily and include a variety of different methods for capturing screenshots, including time delays, full-scrolling web page screenshots, and the ability to define an area of the screen to shoot.

HyperSnap includes an amazing voice capture mode, allowing you to perform program functions just by speaking into your PC’s microphone. Although you’ll need a decent mic and must speak slowly and clearly, it’s a great addition and perfect for people who have difficulty using a keyboard or mouse. 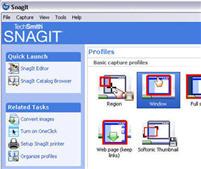 SnagIt lacks this feature but more than makes up for it in other ways, providing a host of options designed to cater for all your capturing needs. Highlights include a preview window, which shows you a zoomed thumbnail shot of whatever your cursor is hovering over, and a webpage catalog maker, which allows you to quickly gather all of your screen captures and create a webpage in five simple steps. There’s also a toolbar which can be used to capture screens more quickly, and this can be installed into Microsoft Office apps.

HyperSnap doesn’t have quite so many capture options, but does boast a number of interesting tools, such as multi-region capturing, which lets you take shots of many different areas of a screen. You also get the ability to capture just a mouse pointer, capture screenshots from dual monitors and repeat previous capture methods for repetitive tasks. However, where SnagIt really knocks HyperSnap for six is its editing facilities. It includes everything you’d expect from a normal image editor, and some excellent specialist tools, including image stamping, RGB colour values, support for changing the viewing perspective of the screenshot, and the power to add annotations. HyperSnap includes a few basic editing tools but unfortunately no special effects library, making it much less powerful than its rival in this department. Unless you particularly want support for voice commands, then SnagIt is the wise choice for the screenshot connoisseur thanks to the sheer amount of features that it offers.

If you liked this article then you'll love our newsletter!

Join us to receive hilarious memes, photo galleries, tips&tricks, and the best games!

How to Screenshot on Chrome